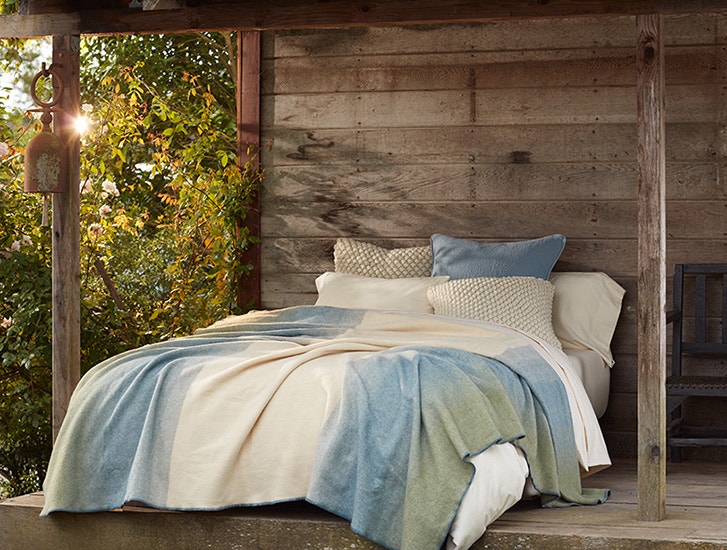 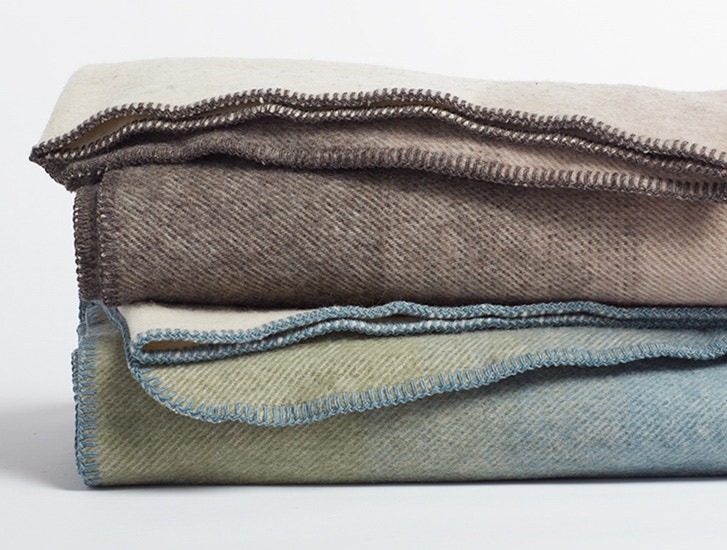 Weaving a Chapter of History

Meet the Makers of Our Seaside Ranch Blanket

Oregon has a long history of sheep ranching and wool production, and Imperial Stock Ranch has been a part of it for 145 years. Established in 1871 by Richard Hinton, the ranch raises Columbia sheep – a heritage cross-breed that Hinton developed commercially, with wool as soft and fine as French Merino – on more than 32,000 acres of high-desert grassland, where they share the terrain with native elk, deer and antelope. 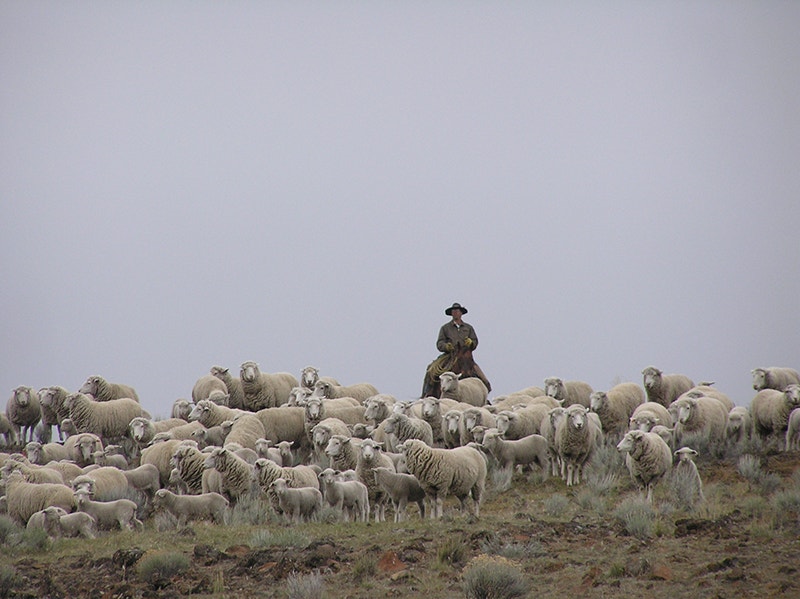 "On the Ridge," photo courtesy of Imperial Ranch.

Dan and Jeanne Carver have owned Imperial Stock Ranch since 1988, only the third family to be its caretakers in a century and a half. They approach ranching in harmony with the land, creating catch basins and other water sources high in the headlands to keep livestock away from streams and creeks, and rotating pastures to prevent over-grazing. "We are focused on tending the landscape, " Jeanne says. "Properly managed, sheep are an instrumental part of the ecosystem, stimulating root development and increasing seed-head production in plants. As they graze, they’re improving the health of the land. It's an important relationship that man can't duplicate."

When it comes to ranch management, the Carvers measure their success, not in tons of wool harvested, but in something far more precious: salmon. "Salmon is the number one indicator species of the health of the total system," Jeanne explains. In 1990 only two salmon came to spawn in Buckhollow Creek, one of the waterways that springs from Imperial Stock Ranch's rim rock landscape. Some 26 years later, record numbers have been counted there. "The greatest indicator of whether we're doing a good job," says Jeanne, "is how many salmon return to spawn in that creek."

And the Carvers treat their animals with the same respect and care they show the land. Their sheep roam the landscape year round, protected by livestock guardian dogs, grazing on olean grasses and native plants, sheltered by natural landscape features and never treated with pesticides. In fact, Imperial Stock Ranch treats its land and animals so well, they were asked to assist in developing the Responsible Wool Standard [RWS], a global sustainability-certification process created by the Textile Exchange. As the first American ranch to go through the certification process, they were instrumental in shaping and refining the standard, which is scheduled to launch this month.

When they purchased Imperial Stock Ranch, beyond the land and the animals, the Carvers assumed responsibility for the rich history of the place and the breed, along with the preservation of a regional artisan tradition that would soon be threatened with extinction.

"In the late 1990s, when the commodity market faltered, and textile manufacturing mostly went overseas, tens of thousands of American sheep producers went out of business," says Jeanne. "We went another way." With no way to sell their raw wool, they first began creating and selling premium yarns and then partnered with fashion designers to craft wool clothing – launching what has been lauded as a ranch-to-runway "slow-wear" movement.

And here's where we get to our own Seaside Ranch Blanket. To make it, wool from Imperial’s program is shipped to North Carolina to be cleaned and combed, then sent to New England to be dyed by a workshop founded in 1869. It's then blended and spun into yarns (dying the fiber first creates the ombre design's nuanced, heather hues) and woven under the direction of a weaver whose family has been crafting textiles since the 1600s. The woven wool fabric is washed to relax the hand and cause the fibers to "bloom," then it's brushed to raise a soft, lofty nap on both sides. Finally, each piece is edged with whipstitching, folded and packed under the weaver's watchful eye.

The result is a warm, cozy, extraordinarily beautiful blanket -- a piece of American history and an heirloom in the making. 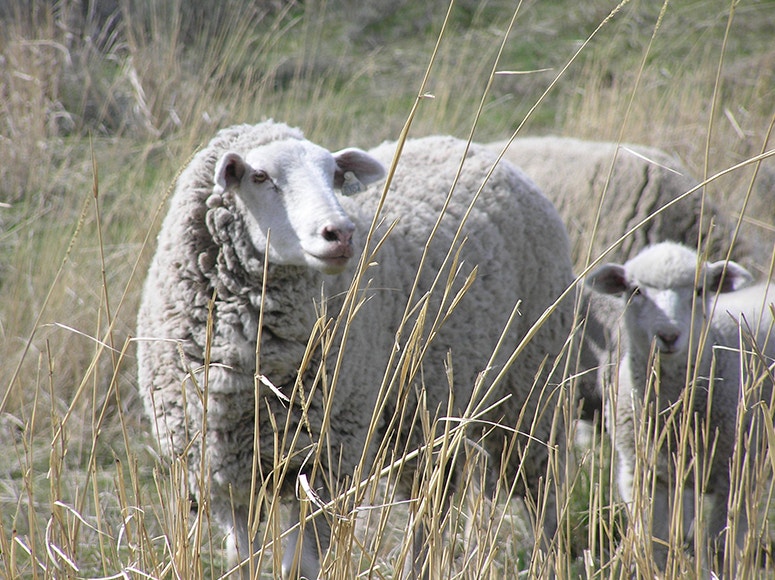 "In the tall grass," photo courtesy of Imperial Ranch. 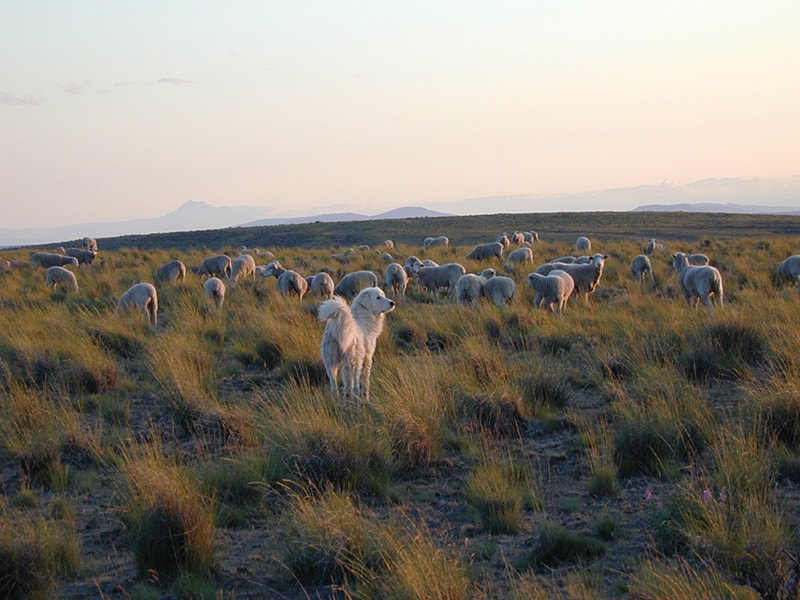